Year or two back I was camped at Lake Pueblo State Park, having dinner on a beautiful, warm, late Sept. evening.  Out of the corner of my eye I caught movement down around my feet.  I jumped up when this big tarantula marched by - a big brownish tan spider.  I thought, what the hell.  Is that thing a pet escapee from a near-by trailer?  I ran to the truck to get my camera, but by the time I got back I couldn't re-find the giant spider.  It was trucking right along when I first saw it.  In the morning when the ranger came by checking camping permits, I told him about the spider.  He said, oh, yes, some falls they come out in great numbers, mostly males looking for mates.  In all the years I had been coming down to Pueblo I had never seen one before.  I had no idea we had tarantulas in Colorado.   I did some research when I got home and found out they are quit common in the southeast corner of the state, and indeed, some falls the males do come out in numbers looking for mates.  You never see them the rest of the year.  I guess sometimes they are so numerous there will be hordes of them marching across the roads.

So earlier this week, Rocky and I set out for Pueblo to look for giant spiders.  The first morning we had walked down to the lake shore for Rocky to take a swim.  On the way back to camp there was a spider trucking along up on the flats.  They can really move along.  Got a couple of pics.  Rocky didn't quite know what to think of it.  I didn't let him get real close.  I kind of kept my eye out for them the rest of the time we were sitting around camp.  They seem pretty docile, but I don't know what Rocky would do with one if left to his instincts.

Didn't see a whole lot of other wildlife.  Lots of bunnies, he usual curved-bill thrashers and canyon towhees were around camp. Saw the resident osprey catch a fish.  We camped in the same spot we camped in a couple weeks back in late August when we saw all the little lizards.  No sign of them this time.  I wonder if they have already gone in for the winter?  It was quite warm this trip, but no sign of them. 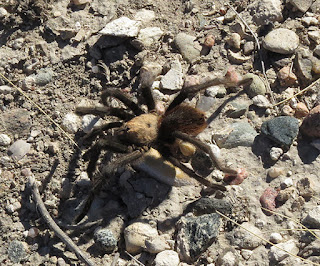 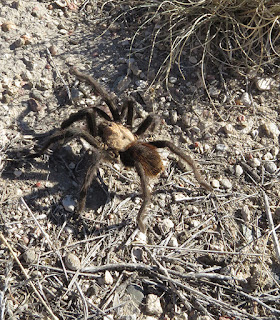 The morning we left we saw a flock of cedar waxwings down along the river.
Posted by BirdsbyBill at 6:21 PM No comments:

We cut down two gangly fir trees in the backyard this spring.  We didn't have the stumps removed, but wished we had as they were rather ugly right next to the pond area.  As spring progressed, we noticed a bunch of sunflower plants starting to grow in the area around the stumps.  We decided to just let them go.  They turned into a sunflower jungle hiding the stumps.  They have also attracted a flock of American and lesser goldfinches.  They have been a joy with their constant song and bright colors.  They continue to feast on the sunflowers everyday, and have completely cleaned out maybe a third of the flower heads.  They also enjoy bathing and drinking at the smaller of the pond waterfalls.   Hopefully they'll stick around for the winter.

Our butterfly bush has attracted a number of butterflies this summer.  First it was a number of tiger swallowtails, and now in the last week a bunch of painted ladies.  I did a story once on an elementary school program where students grow and release painted ladies as part of a biology project.  I think they still do it, so I wonder if these are freshly released from a nearby school. Butterflies are just amazingly beautiful.

We don't get a lot of hummingbirds during the summer, but we do get a few in spring and late summer as they migrate.  They love the butterfly bush in the backyard.   They like the pond waterfalls, too, hovering at them to get a drink.  Haven't gotten a good sharp photo so far.

Rocky and I took a trip down to Pueblo a week or so back.  It was a nice cool, showery break towards the end of August, almost fall like.  Don't usually go down to Pueblo until later in Sept., but the cooler weather made it appealing.  Camped next to a large clump of western red cedars that was home to family of little lined lizards.  There were large adults and tiny little babies.  I think at one time I counted up to a dozen visible at one time. When the sun was out, they came out in force to sun on the south side of the cedar clump.  They drove Rocky crazy.  He kept trying to catch them, but had no luck.  They were bold, yet very fast.  They would watch him as he stalked them, then dart under the cedars at the last minute when he lunged at them.  He finally grew tired of the chase and just sat there watching them.

One morning I saw a flash of yellow and black at the pond.  At first I thought it was one of the regular goldfinches but it looked to big.  I grabbed the binoculars - male western tanager!  Grabbed the camera and managed to get a shot before he jumped up into the nearby dogwood.  We had one visit the pond this spring during migration.  I wonder if it was the same one, passing thru on his way south.  The red on the head appeared somewhat mottled, but maybe it was just because he had just taken a bath in the waterfall.

Posted by BirdsbyBill at 8:08 PM No comments: