Finally, we got a nice January thaw.  The holiday season was pretty cold and snowy.  After that, I had ants in my pants to get out and go camping.  Plus, we got a new dog right before Christmas, Rocky, a smallish lab mix.  Just as cute as can be and really sweet, nice and pretty well behaved already.  He's not quite a year old.  Couldn't wait to take him camping.  Been wanting a camping dog for so long.  We found him through the Safe Harbor Lab Rescue.  Went to see him and just fell in love with him immediately.  Brought him home that day. He's quickly becoming a member of the family.

Anyway, two weeks ago we finally got a couple of nice days with temps in the 50's and 60's.  Rocky and I took off for Lake Pueblo State Park.  Had a great time.  Rocky adapted nicely.  He's a very easy going dog.  He took right to the camper and hopped right up into the bed I made for him.

As usual, a mockingbird was soon exploring our camp.  He was oblivious to Rocky who was most interested.  Sat up on the top of some cedars that made a nice windbreak for our campsite, and made raids down onto the picnic table.  Pueblo is about the northern most range of mocking birds along the front range of Colorado.  Don't know what there range is on the west slope.  Rocky seems very interested in birds.  He is fascinated with the geese, ducks, and crows and ravens down at the lake.  He likes to watch them fly overhead.  I think we'll get along just fine.

We took lots of walks down to the water and came upon this flock of wintering mountain bluebirds in some cottonwoods.  Got a couple of shots with the SX50.

Our second day in camp, Rocky finally settled down in the afternoon sun.  After a day and a half of constantly being on guard and at the limit of his tether, he settled down at my feet to take a snooze.  I carefully got up and went over and snapped a couple of shots of him.

There's been a bald eagle down at our lake for the last couple of days.  Seen it at the ice edge of the open holes eating on a couple of dead geese and duck carcasses.  This morning on our Sat. walk around the lake, there it was sitting in the top of a large cottonwood up by the playground.  I hadn't taken my camera as it was gray and overcast, but went back down after we got home and got a couple of shots of it.  Had attracted quite a crowd of folks watching and taking pics.  Just sat up there oblivious to the folks below.  I got a couple of shots, even though the lighting was very flat.  A day later, the eagle was out sitting on the ice fairly close to shore in bright sun.

Drove out to Barr Lake the other day.  Lots of birds out in some open pools, but too far out for any photos.  There were a couple of pintails in close and got a shot.

Finally, a shot of Rocky working on dismantling his Mr. Bill toy.  Rocky is very good at destruction of dog toys. We have to immediately take out any squeakers or noise makers as he can get those out and attempt to digest them in the first ten minutes.  I can't believe some of the stuff they put in dog toys.

Rocky and I might head out to Jackson Lake next week.  First of the week is supposed to sunny and warm. 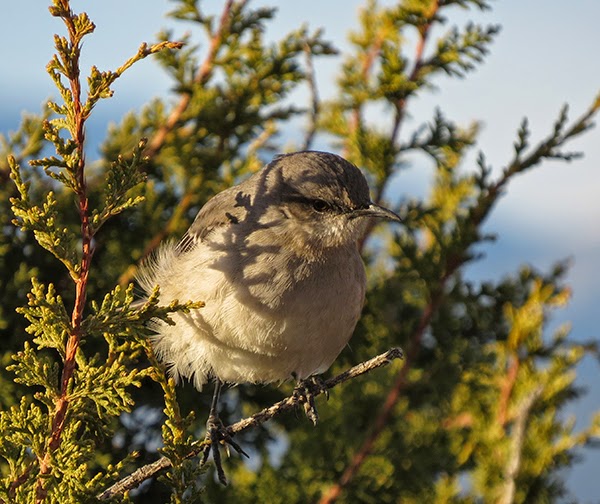 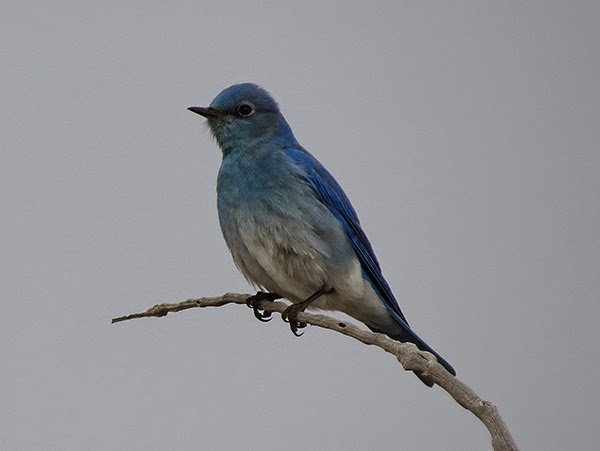 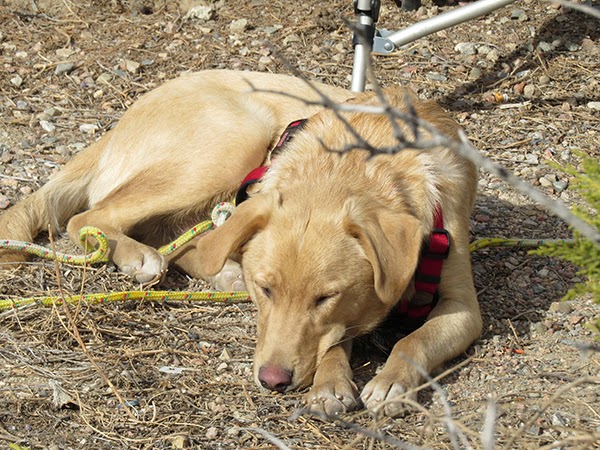 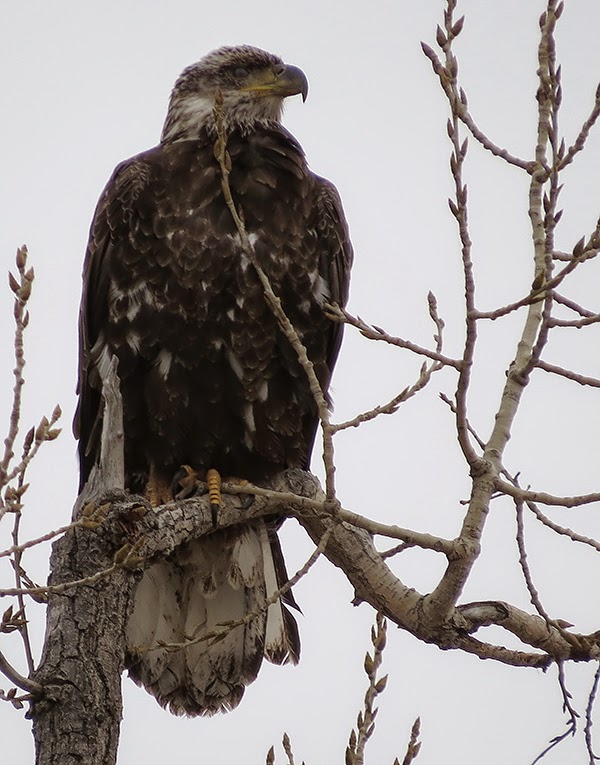 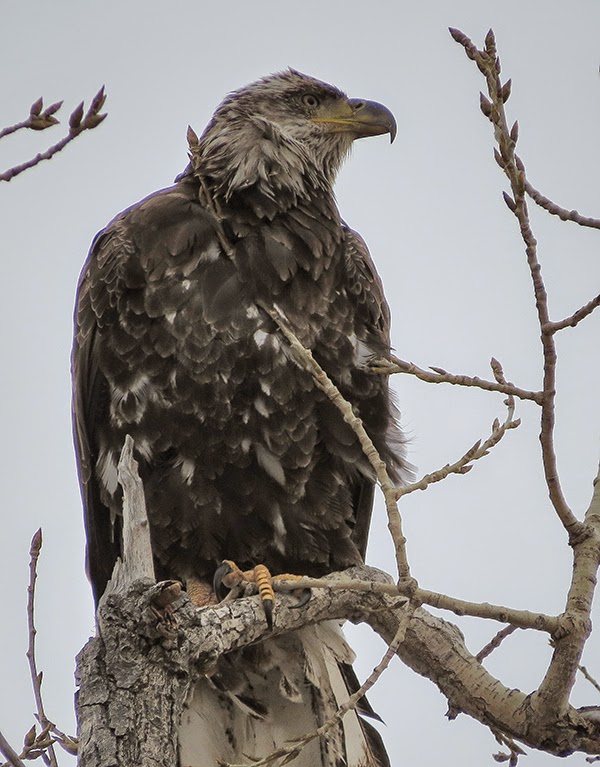 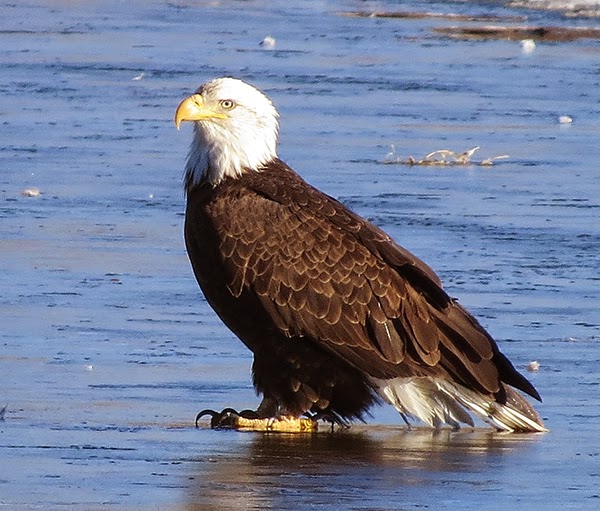 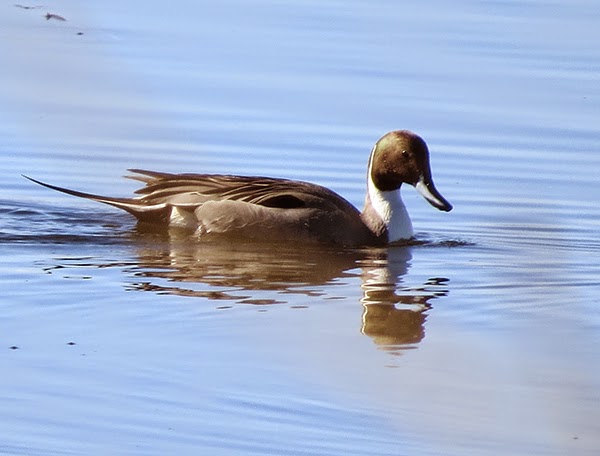 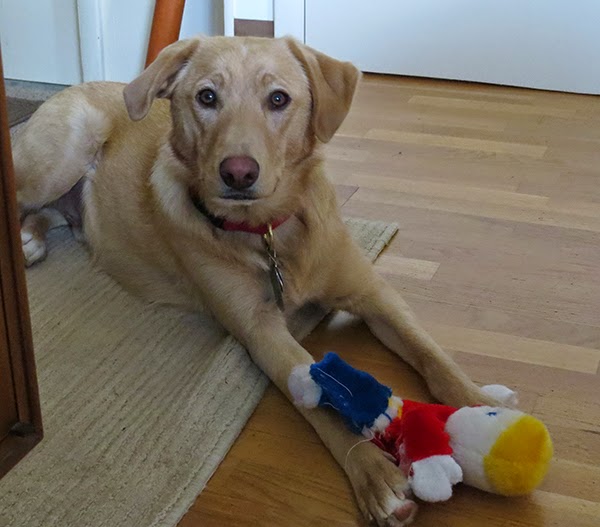 Posted by BirdsbyBill at 7:34 PM No comments:

Sure been a while since I posted anything here.  Had a really nice warm fall up till about a week before Christmas.  Well, I guess that's getting to be winter time, and it sure turned into winter all of a sudden.  Been cold and snowy for a couple weeks now.  A chinook blew in this morning and made for a dramatic swing in temps - five below at 2AM, and 52 by 1PM.  Went out and shot a few pics with my new Canon SX50. I'd been curious to find out what kind of wildlife photos I could get with one of the new superzoom bridge cameras, so just after Thanksgiving for some much needed retail therapy, I bought the Canon.  All the pics in this post were taken with it.  It's pretty amazing.  1200mm with a small light body compared to 11 pounds or more with the 500 or 420mm.  Not quite the quality as with the big glass and DSLR body, but pretty amazing.  Found this pair of hooded mergansers along Clear Creek and these two canvasbacks in Prospect Lake. The mergansers have relatively thin small bills compared to the long sleek bills of the canvasbacks.  Nature is so amazing.   Flat lighting today, though.  Pesky wave clouds have plagued photo efforts for weeks.  Seems like we have a lot more mountain wave clouds than we used to.

I've been carrying the new camera with me on my daily walks down to the lake.  Heard these eastern bluejays calling the other day along the way and got this shot of one.  First shot of an eastern blue jay in a long time.  They have been expanding their range here in Colorado in recent times.  When I first moved here in the early 70's there weren't any.  Now they are fairly common.  There is this red-tailed hawk that has taken up residence in the field down by the lake.  There almost every day.  Difficult to get close enough for a good photo most the time.  That is unless he's sitting on a light post over the street, which of course is when I don't have the camera with me.

Went camping down at Lake Pueblo State Park the first week of December, just before winter really set in.  This flock of bushtits kept hanging around.  Nervous little, gray fluffs.  They were feasting on the seeds of the rabbit brush.  First time photo of this bird.  I've seen shrikes down at Pueblo on several occasions, but this one was really busy around my camp.  It was managing to catch something from his post on the electric service box.  Not sure if it's a northern or loggerhead. 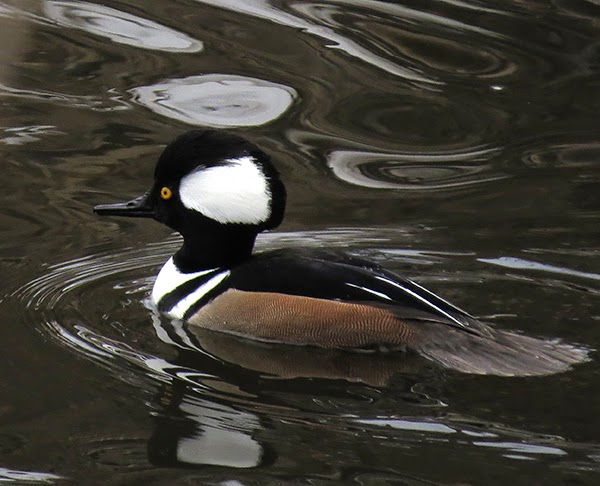 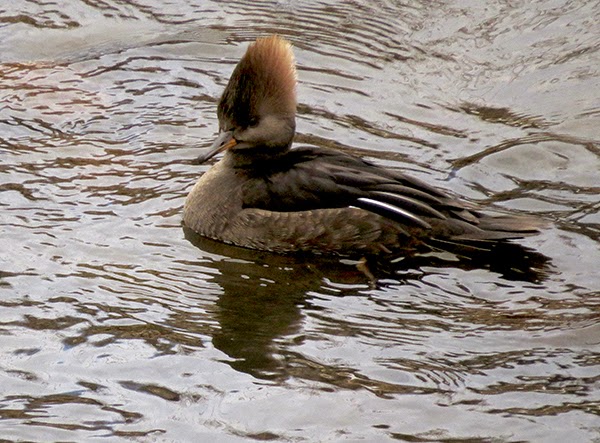 Of course there are always curved-bill thrashers down at Pueblo.  They and the canyon towhees always manage to clean up any crumbs.  They sure have some mean looking eyes don't they?  It was Christmas time and one of the few things I like about the season are lights.  So, I put some battery powered ones on the Running River Inn, but I don't think anybody but me saw them.  Hardly saw a soul while I was down there this last time.

Anxious to get out and go camping with my new dog, Rocky.  Just waiting for a good little thaw and we'll be gone for introductory trip for Rocky.  I think he'll love camping. 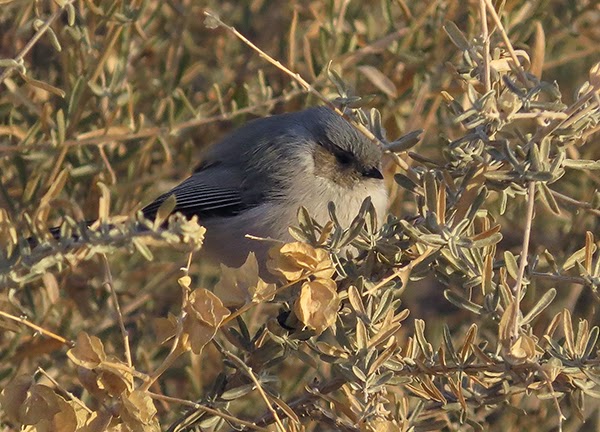 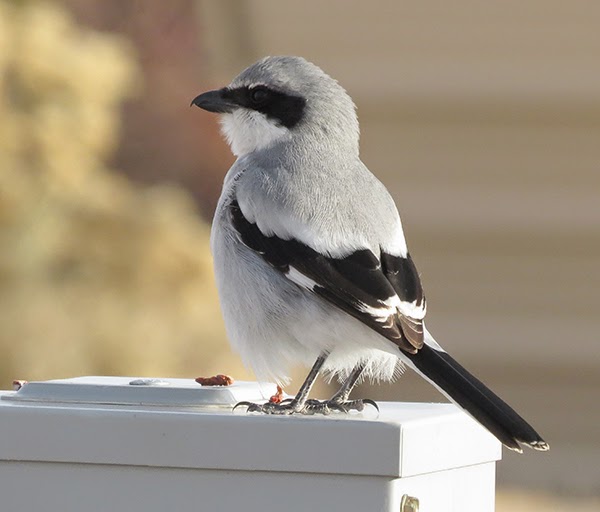 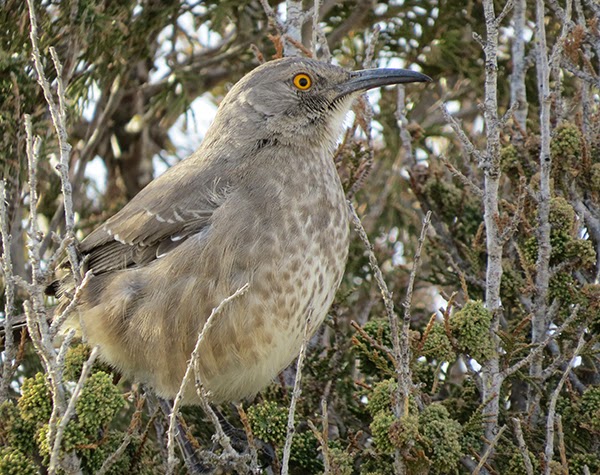 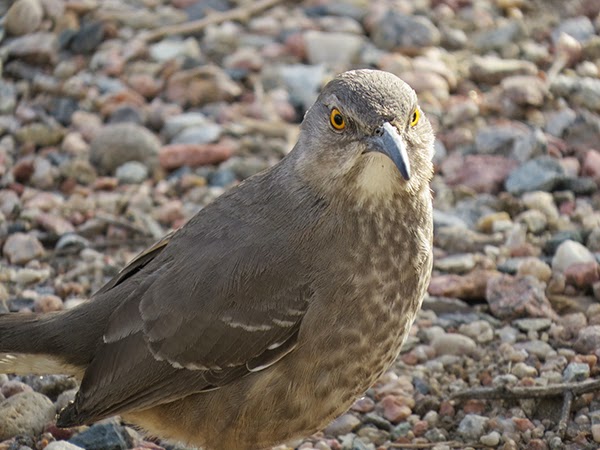 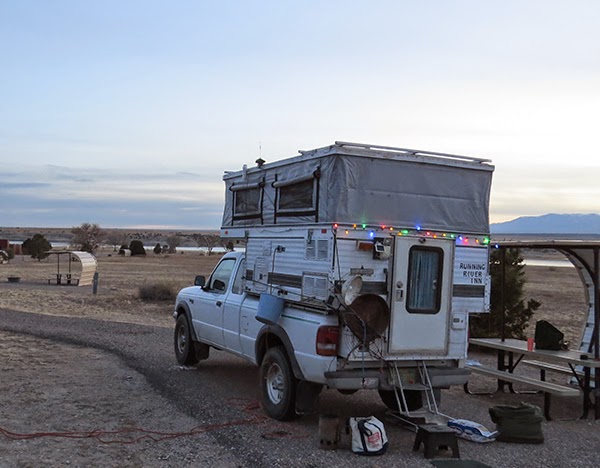 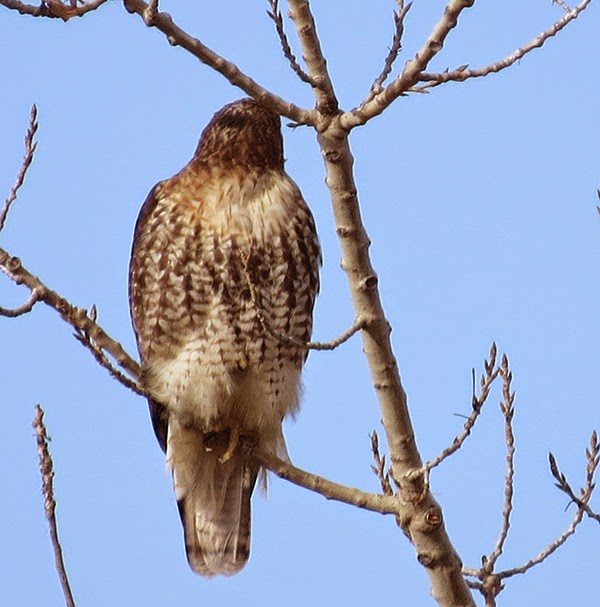 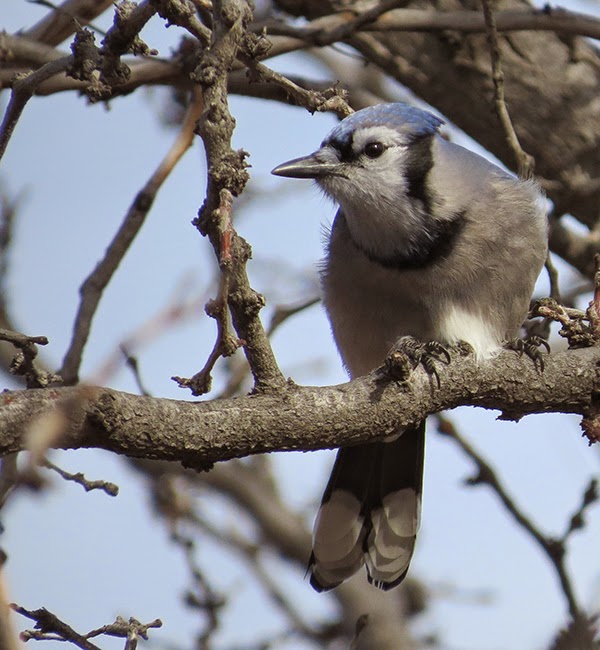 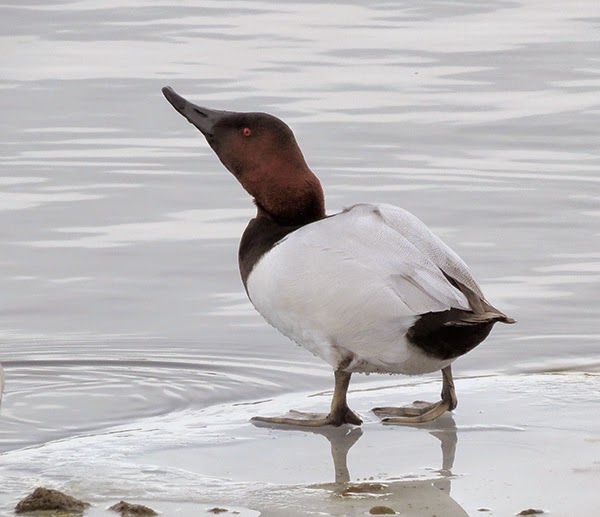 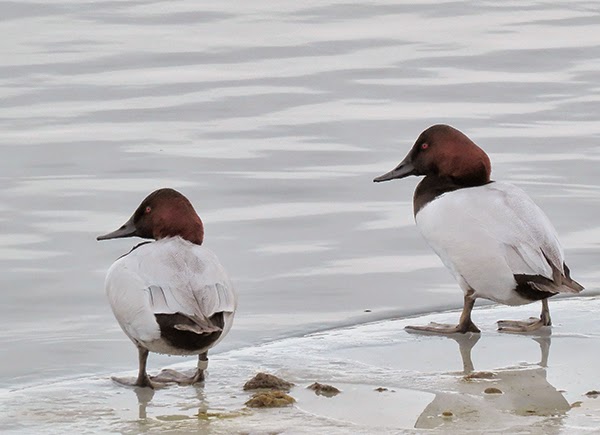 Posted by BirdsbyBill at 7:40 PM No comments: