Been kind of  a hard fall and winter.  My mom died in Oct. and I went back to Memphis in November for her memorial service.  No sooner trying to get over that and I get news that my sister's husband Jimmy is found dead in his house, so it was back to Memphis again.  Both hard trips.  Stayed with my sister's daughter, Emily, and her family down in Hernando, Miss.  Nice little town.  Flying in for my mom's service it was clear and bright and we flew right over the pyramid and downtown.  The second time in Jan., I was hoping for a clear shot of the Mississippi in flood stage at Memphis, but it was overcast and only got a little glimpse of the river as we broke thru a low ceiling while landing.  Very clear that the river was flooding, however.  And driving around Memphis you could see backwater in the Nonconnaha and Wolf River lowlands - those gray brown soaked woods of the mid-South

.  One day Brad, Emily's husband and I, went on a little sight seeing tour.  We drove down to Batesville to look for the Iowa Pacific passenger train that had been running excursions on the latest acquisition of Iowa Pacific.  We found it parked in an industrial park just east of town in a Mississippi downpour.  Nice looking train.  We followed the old Illinois Central passenger mainline back up to Hernando.  Couple of interesting old towns along the route including Coldwater and Senatobia.

This winter has seen an extended period of cold and snow cover for the Front Range.  Had a good foot or more just after Christmas that has stuck around till just recently.  Actually a glacier in a shaded area of our street has stubbornly persisted.  Was just about gone when last week we got a good 14-16 inches.  It was right back.  But, the sun is a bit higher in the sky now and the days a bit longer so it's just about melted again.  But, it's been an extended period of winter.  Finally two weeks ago we got a January thaw.  Rocky and I packed up and headed to Pueblo for two days.  It was cloudless, wall to wall sun, crystal blue skies and temps in the 50's and 60's.  Just got back again from two more nights.  Even warmer with one afternoon getting up into the mid 70's.  Just gorgeous.  I love going to Lake Pueblo State Park in the winter.  Usually a bit warmer down there.  And such an expansive view.  you can see the Spanish Peaks down by Walsenburg, a good 40 miles to the south.  I love the wide open vistas of the west. 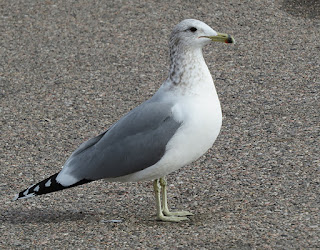 Posted by BirdsbyBill at 5:57 PM No comments: